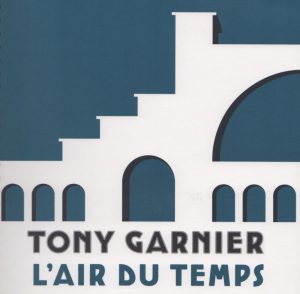 The Irving J. Gill Foundation (IJGF) is pleased to share some good news. In its ongoing effort to preserve the legacy of Irving J. Gill (1870-1936), the IJGF has contributed a chapter to the new book Tony Garnier, L’Air du Temp. Written by IJGF president James B. Guthrie, the chapter, Tony Garnier & Irving J. Gill, explores the interesting relationships between the lives and works of Garnier and Gill, two of Modern architecture’s most important pioneers. Published by Musée Urbain Tony Garnier in Lyon, France, this French-language book explores Garnier’s life and work in celebration of the 150th anniversary of his birth in Lyon. Like Gill, Garnier’s early development of Modern architecture and city planning is often eclipsed in the casual press by later architects who have had a greater desire for self-promotion. Tony Garnier, L’Air du Temp can be found in architectural bookstores throughout France, including the prestigious Cité de l’Architecture & du Patrimoine in Paris.

Irving J. Gill Foundation
Another Way to Give

Use this link, then when you shop using AmazonSmile Amazon will donate 0.5% of the price of your eligible AmazonSmile purchases to the Irving J. Gill Foundation.

“You could even say Irving J. Gill is the architect most directly responsible — more than R.M. Schindler, Richard Neutra or any of the Case Study crowd — for the character of Southern California modernism.”
Christopher Hawthorne, Architecture Critic
Los Angeles Times
September 09, 2016

Irving J. Gill is well known for his pioneering efforts in finding new methods of construction that were sympathetic with his equally pioneering architectural aesthetic. One of many and well known, examples of this is his early adoption and experimentation with cement and tilt-wall construction. 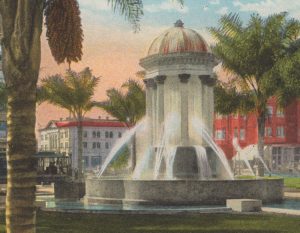 Gill, ever the progressive designer and patron of art and architecture, also turns out to hold a title of First when it comes to public art. According to the City of San Diego’s Commission for Arts and Culture:
“The Civic Art Collection began unofficially in 1909 when the City accepted the gift of the Horton Plaza Fountain, designed by architect Irving J. Gill, from local businessman and banker Louis J. Wilde.”
Visit Gill’s recently restored fountain and park: Map

The Maybeck Award is an exceptional honor that is given to a limited number of California architects. Winners must show a lifetime of significant achievements, substantial contributions to the profession, and a body of work that is notable and influential. Gill meets all these criteria, and the judges voted unanimously for Gill to thus be honored.

The following video features Gill’s architecture and is composed of portions of the application submitted by the Irving J. Gill Foundation to the AIA CC. It was first shown at Irving J. Gill: Transitioning to Modern, the Foundation’s symposium and celebrations held on April 26, 2018 in San Diego.