Irving J. Gill is noted for his pioneering and creative use of forms and aesthetics which places him at the dawn of the Modern Movement in architecture. While most other architects working in the beginning of the twentieth century were clinging to borrowed and fashionable styles, Gill pushed the technical and artistic boundaries of architecture. As a result, and during his lifetime, his notoriety would reach national and international stature.

Gill lead the way for other architects to follow. His unique formal vocabulary would become the basis of the architectural forms used later by architects of the de Stijl Movement, the Modern Movement and the International Style.

The bulk of his progressive work was built between 1907 and 1929. Unfortunately, the Depression greatly slowed construction of his designs. Then his death in 1936, at only 66, precluded a post-WWII career that would have provided an interesting period of growth and further fame, as it did for a number other modern architects who also got their start before the Depression. 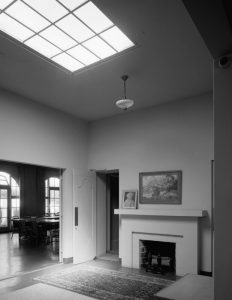 The seeds of his emergence as a modern architect came from his apprenticeships in Chicago for Joseph L. Silsbee and Adler & Sullivan (1890-1893). Along with working for these great architects, he worked side-by-side with a number of other young architects who would also rise to fame. His fellow Chicago apprentices included George G. Elmslie, George W. Maher, Frank L. Wright and others.

Moving to San Diego, California in 1893, Gill would go on to create a new architectural vocabulary that responded to Southern California’s climate and context in the same way that his Chicago associates would use the Midwest prairie for their inspiration. Gill, more than his Midwestern contemporaries, took to heart the teachings of Sullivan who said:

“It would be greatly for our aesthetic good if we should refrain entirely from the use of ornament for a period of years, in order that our thought might concentrate acutely upon the production of buildings well formed and comely in the nude.”

Gill embraced this lesson and designed his buildings in great detail and in pure form, stripping all unnecessary ornament from them to create an architectural opus of enduring strength and beauty.